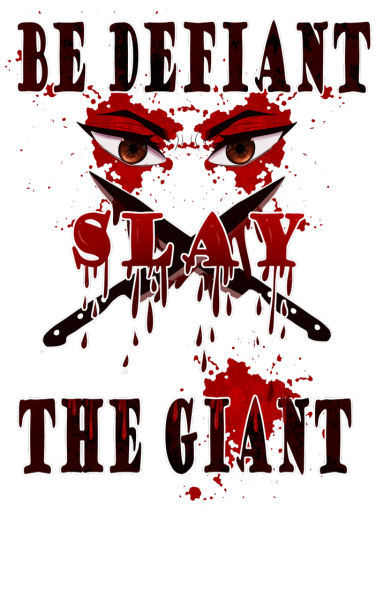 We all have giants in our lives that are challenges. How do we defeat the giant? Be defiant. The definition of the defiant means “bold.” How can we be bold? If you have accepted Jesus as Lord and Savior of your life, you are in covenant with Him. Covenant: an agreement, contract, guarantee, promise, commitment. The word of God is our agreement. It is the same as signing off on a car or a home. The confidence is there because of the legally binding papers. There’s no time like the present to accept Jesus as Lord and Savior because it comes with benefits.

David in 1 Samuel 17 faced a giant over nine feet tall named Goliath. Imagine a little boy facing someone who is huge! It can be a frightening thought! Goliath taunted the Israelites for 40 days which caused them to fear.  But because David believed in the covenant, he was able to have confidence that God would deliver him. He also had something to look forward to which gave him the strength to defeat Goliath. King Saul’s reward for slaying the giant was a huge sum of money and marriage to his daughter. His brothers and the King tried to discourage him from fighting the giant. They said he was too young and inexperienced against a warrior. David didn’t pay them any attention. He focused on the reward. David asked “who is this uncircumcised Philistine going up against the living God?” Goliath was not in blood covenant which means he did not have a legal right to come up against God’s people. David said “I killed a lion and a bear; I can defeat Goliath.” David had faith that if God delivered him before, He can do it again. David used what he had to slay the giant. When Saul gave him his armor, it didn’t work. David used his sling shot and five smooth stones to defeat Goliath. What works for another person may not work for the next person; use what you have and trust God for the rest.

Wear the Full Armor of God

Ephesians 6:10-18 Easy Read Version says 10 To end my letter I tell you, be strong in the Lord and in his great power. 11 Wear the full armor of God. Wear God’s armor so that you can fight against the devil’s clever tricks. 12 Our fight is not against people on earth. We are fighting against the rulers and authorities and the powers of this world’s darkness. We are fighting against the spiritual powers of evil in the heavenly places. 13 That is why you need to get God’s full armor. Then on the day of evil, you will be able to stand strong. And when you have finished the whole fight, you will still be standing.

14 So stand strong with the belt of truth tied around your waist, and on your chest wear the protection of right living. 15 On your feet wear the Good News of peace to help you stand strong. 16 And also use the shield of faith with which you can stop all the burning arrows that come from the Evil One. 17 Accept God’s salvation as your helmet. And take the sword of the Spirit—that sword is the teaching of God. 18 Pray in the Spirit at all times. Pray with all kinds of prayers, and ask for everything you need. To do this you must always be ready. Never give up. Always pray for all of God’s people.

We don’t have to put up with the giants in our lives anymore. As we stay focused on the reward, we can tackle our shackle. When people or the circumstances say different, pay them no attention. Just imagine the wealth, a peace of mind, and health waiting on the other side to give you determination to get to your final destination. Be defiant (bold); slay the giant!

3 thoughts on “Be Defiant; Slay The Giant!”